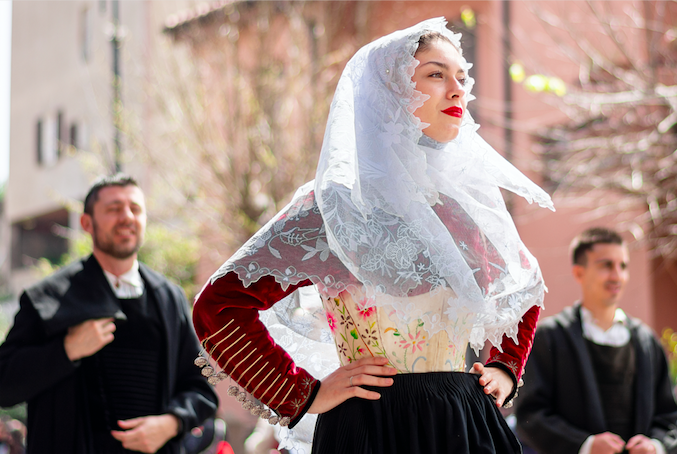 Handed down is glamor

“And yet again the costumes changed. The scarlet was still there, but without the green. The green had ceded its place to mauve and pink. In that modest town, chilly from the ubiquitous stone, the women were shining. The geranium-colored skirts, the sleeveless bolero jackets curly at the waist, and trimmed with a long pink band with mauve and lavender stripes. They proceeded amidst the dark houses, under an icy sky, these women clad in vermilion and pink who seemed to be melting in an impossible buzz of colors. What a daring mix of hues.”

In his travel diary Sea and Sardinia, David Herbert Lawrence gives this description of the traditional costumes of Sardinia. While they were once worn as a matter of course, the traditional Sardinian costume today is used for religious holidays, one of which is the feast of Sant’Efisio, that features an impressive parade through the streets of Cagliari. Besides presenting folklore and beauty, it also is a symbolic celebration of identity, as it recounts patterns of ancient memories.